Festival of the Sea – Rota Palagruzona

The historical regatta from Komiža to Palagruža, was first organized on June 12th, 1593, exactly 182 years before the Cumberland Cup on river Thameas believed to be the oldest sailing regatta in the world.

It was not a ‘sports event’, as regatta is defined in the Encyclopedia Britannica. On the contrary, the Komiza-Palagruža regatta was a vicious race against the wind and waves, in merciless open-sea conditions,  in order to reach the best fishing posts where the fishermen would spend the next twenty days fishing and salting of caught fish.  It was a matter of survival.

The firing of a cannon from the top of the Komiža fortress marked the start of this fishermen regatta. Up to a hundred falkuša boats would take off from Komiža towards the island of Palagruža. This is a big story, a globally important one, because it tells about these fishermen who successfully rose to the challenge of survival. The sea provided them with the opportunity for survival. And this incredible industry developed here. Imagine five hundred people on a small beach of Palagruža islet, . Five hundred fishermen busy with salting the caught pilchard and drying the nets. They would pull the boats ashore because these were dangerous open-sea conditions. They were also targeted by pirates as well as Venetian authorities looking to collect the taxes from these hard-to-reach fishermen in the open-sea islands. Back in the day when these fishermen were the only Mediterranean fishermen fishing in the open seas, then frequented by pillaging pirates, they managed to develop an impressive industry. In the 18th century some 20 thousand barrels of salted pilchard were exported from Komiža annually. One barrel contained 60 kg.  This was a large industry.

It must be said that we have not only saved one boat from historical oblivion, but also a unique regatta, which happens to be the oldest sailing regatta in the world, and alongside that we have also preserved a language, a memory of these fishermen, their stories, sayings, their vocabulary lingua franca shared by mariners all across the Mediterranean, which is still preserved in the language of these fishermen.

Therefore, this is a globally important story that we are trying to present, and in this mission of presentation of the Croatian maritime heritage to the world, falkuša „Comeza-Lisboa“ has travelled some 40 thousand kilometers all over Europe, to be featured at various world maritime festivals, such as the Lisboa World Expo in 1998 and most recently the Navalis festival in Prague, when falkuša sailed down the Vltava River below the Charles Bridge. The aim of our mission is therefore to present to the world that part of Croatian heritage still not valorized enough in Croatia – the maritime heritage.

In 2009, the Ars Halieutica established the Rota Palagruzona Sea Festival, which also includes a renewed historical regatta from Komiža to Palagruža. It is probably one of the oldest historical regattas in Europe.

The millennium circle of a historical boat, the falkuša, is complete. She was the response of the fishermen of the island of Vis to the challenge of survival. Today, she is the symbol of Croatian maritime heritage, a boat by which the world recognizes Croatia’s Mediterranean cultural identity. The falkuša is not only a historic boat — she is an example of the response to the challenge of survival, she is a legacy for the future. 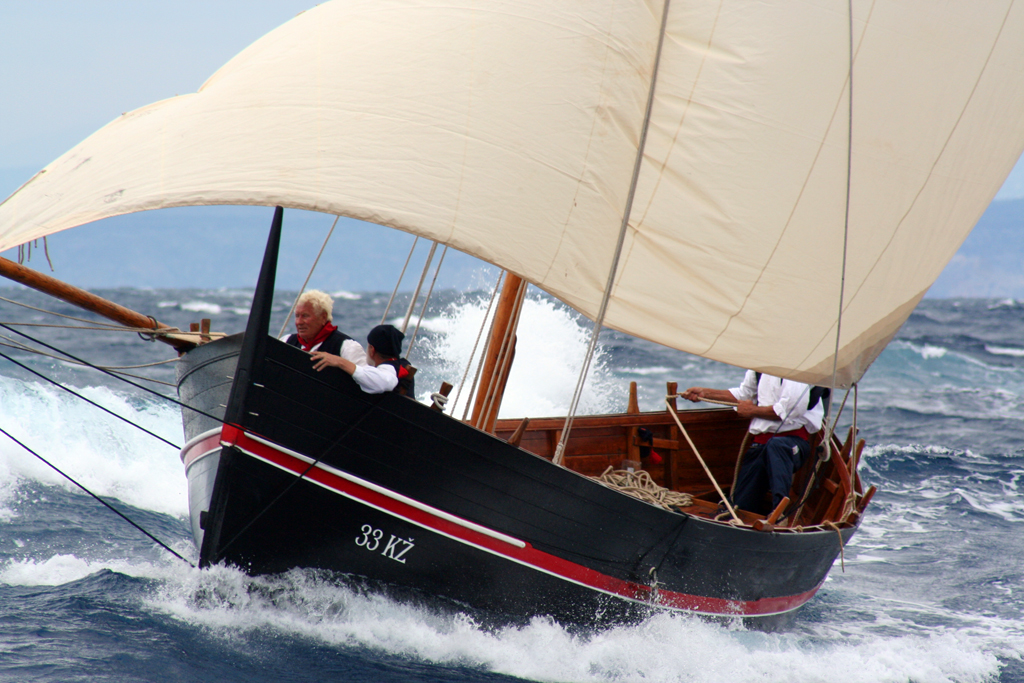