Dubrovnik’s maritime routes continued along continental routes. Without the deep inland territories of the Balkans, the maritime trade routes would not hold as much importance as they did in the life of Dubrovnik and its economy. Merchandise arriving by boat from distant ports was largely transported along the Dubrovnik route / the road to the Balkan hinterland. Merchandise was transported from the hinterland to the city of Dubrovnik in the same manner, to be loaded onto sailing ships and transported to distant maritime destinations. The starting and finish point of the Dubrovnik route was its eastern city gate, in the area of Ploče. The road continued on through the areas and towns of Župa Dubrovačka, Trebinje and Gacko, and further through Foča, Novi Pazar and Kopaonik, all the way up to the town of Niš, where it connected with the old Roman road which led to Istanbul. The Dubrovnik Road was the cornerstone of Dubrovnik’s economic survival, but it also presented a danger to Dubrovnik’s security and freedom, because it enabled an easy entrance to all enemies and conquerers. For this reason, Dubrovnik had to develop the art of diplomacy in order to appease the interests of the two greatest opposing forces: Venice posed a threat of attack from the sea and the Ottomans were a threatening force from the continent. To keep all this in balance, Dubrovnik paid taxes to the Ottomans and Venice found their own interest by using Dubrovnik as the contact point for their trade with the continent.

The caravan routes used horses and mules for the transportation of goods and were in constant danger from raides and robbers who made their living by plundering along the caravan routes. Dubrovnik’s merchants thus secured these routes by sending paid guards to various spots along the route and having a well-armed escort accompany the caravans. Dubrovnik was hence able to preserve the status of a center of trade and the greatest trade emporium along the eastern coast of the Adriatic.

Dubrovnik’s merchants sold goods high in demand in the Balkan interior:  fish, spices, textiles, raw hides and skins, weapons and jewelery, while caravans coming from the continent to the sea brought back goods such as minerals, beeswax, precious metals, mostly silver, as well as lead. Bosnia and Albania produced high quality wood which was used in great quantities in Dubrovnik’s boatbuilding industry.

Mineral trade became a great source of revenue in the 15th and 16th centuries, when mining developed in Bosnia and Serbia. Silver was then exported to Italy, as well as across the entire Mediterranean. Silver trade was the most cost-effective. Venice used Dubrovnik to purchase its supplies of silver which were transported to Dubrovnik from Bosnian mines.

Textile and silk merchants from Ancona, Firenze, Ferrara and Siena filled the streets of Dubrovnik.

Due to the lack of fertile land, Dubrovnik was in great need of grain, which it mainly imported from southern Italy, especially the region of Apulia and the island of Sicily.

The Mediterranean is the sea with the highest frequency of maritime communication in the history of Western civilization.  The sea is a rather less costly space of communication than the continent. Ever since it was founded, the city of Dubrovnik has been a city of trade and exchange of commodities. Due primarily to its seafaring and ships built in its shipyards, Dubrovnik set up a network of maritime trade routes. In the Middle Ages Dubrovnik started to expand its network of maritime routes across the entire Mediterranean. The most intense trade relations were kept with the Italian cities of Venice and Ancona, Fanna, Ravenna, Molfetta, Bari, Termoli, as well as with other towns in south Italy, and those outside of the Adriatic Sea. The busiest trade routes were those along the eastern coast of the Adriatic, as is evident from the existence of trade contracts with the cities of Split, Trogir, Šibenik, Korčula, Hvar, Ulcinj and Kotor.

As early as the 13th century Dubrovnik’s maritime trade expanded to distant Mediterranean ports in Syria and Egypt, as well as other ports in north Africa.

The year of 1358 marked the end of Venetian rule over Dubrovnik, making it a turning point in the life of the city, soon to experience a great increase in and development of maritime affairs and trade. In the second half of the 14th century and throughout the 15th century, Dubrovnik saw a sudden boost in its seafare and commerce. Maritime routes expanded to include the coasts of Spain’s Aragon region and France.

The 15th century saw the emergence of another great force in the Mediterranean aside from Venice – the Ottoman Empire. In order to keep their right to free trade, Dubrovnik agreed to pay the taxes to the Ottomans.

In the 16th century Dubrovnik’s carracks were already sailing to European ports in the Atlantic, namely, to English ports. At the time Dubrovnik had somewhere between 170 and 200 large sailing ships, of which the most impressive were carracks – fit enough to weather the mighty Atlantic. 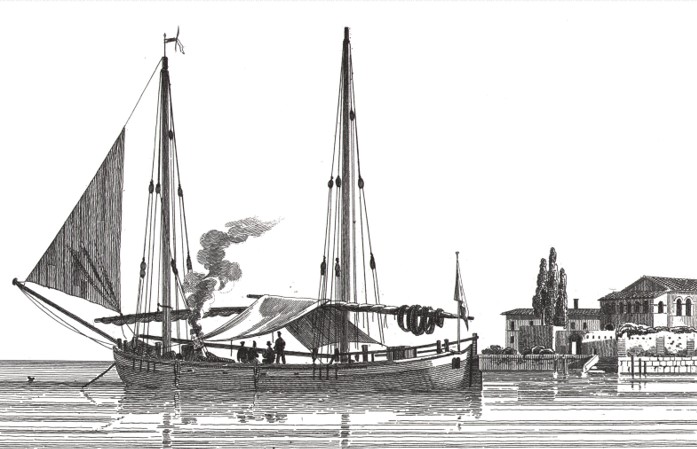