A JOURNEY BETWEEN TWO SEAFRONTS

Ankòn is Greek for elbow. It’s the city around the port, the urban embrace that extends between the two seafronts. The long journey beginning at the Marina Dorica continues through the yacht shipyards and arrives at the commercial wharves. From this point on, the coastline leads into the fishing area and the fish market facing the Mole Vanvitelliana, in a sequence of curves and parabolas, where fishing ships, clam dredges, ferries, cruise ships, and vessels offering marine technical services dock. Then, beyond the vast Arsenal with the ships still under construction, the coastline resumes its journey amidst caves, overhanging cliffs, sculpture-like rocks jutting out of the water and, high above, the Parco del Cardeto, with its scented shrubs and intricate paths. Thus, we come to the city beach of Passetto, with its legendary white elevator bringing the journey between two seafronts to an end. Equally fascinating is the urban route between the two, with the Viale starting right at the Port, crossing the historic city center, and mounting in a straight line up to the spot overlooking the staircase. And there is the elevator again, overlooking the sea, a beacon of glass and light, with a breathtaking 150-foot drop.

A port of places, people, and work; a port of monuments and rituals, faces, stories, and tradition; a port of identities, languages, perspectives, and local memories. Commissioned by the Central Adriatic Port Authority, Gian Luca Favetto (Turin, 1957), Italian poet, journalist, writer, and playwright, offers us an author’s view of the Doric port. He writes for the newspaper Repubblica and is a longstanding voice of Radio Rai. He is the creator of the project Interferenze fra le città e gli uomini. Among his most celebrated works: Se dico radici dico storie, the poem collection Mappamondi e corsari, the audiobook I nomi fanno il mondo, the novel La vita non fa rumore, and the short story Un’estrema solitudine.

Altogether unexpected. A place of encounters and enchantment. A place that lies on the outskirts of town, just around the corner, east/south-east of where the port turns its back to the sea. It lives a suspended existence, facing the waves, its back to the rocky cliffside.

The traveller arriving in Ancona, no matter from which direction they’re coming, be it even the sea, will not see it. First you have to reach Passetto, a neighbourhood that cropped up in the Sixties, where the Istrian stone WWI memorial stands. And then its rocky beach, which is part of the Conero Regional Park. You have to climb down using footpaths, or take the lift if you like.

Surprise: before you stands a series of caves where people live on holidays and during the warm season. A row of doors. One hundred and twenty, give or take a few. A powerfully evocative image that will carry you away to a magical place, a cross between the Caribbean and Provence.

It is a place for sea dogs. That’s what grottaroli are: men and women, young and old who, even when they walk the streets of the other neighbourhoods where they might even live, are sailors through and through, salt in their blood, their skin like a shark’s, and their hearts beating in time with the waves.

The caves, the rock excavated in the space of a little more than a century, between the 1850s and the 1960s, were originally used to keep boats, mostly the motor boats and the batane used for fishing and mussel harvesting. The construction materials – gravel, cement, bricks – were all carried down by hand. As time went by, they began to welcome refrigerators, kitchens, beach chairs, and a cluster of humanity, lives, and stories. They’re like holiday homes. A place for men, transformed and made liveable by the women, who didn’t start coming down here until after WWII.

The caves are the symbol of a subsistence economy: fishing as an integration of work in the fields. In fact, the grottaroli, who for many years have been using these structures handed down through the generations, are known as the “farmers of the sea.”

Each cave has a door. They are all aligned one next to the other. They are a many-coloured necklace, with beads of blue, yellow, light blue, brown, and ochre. And staircases, gates, daises, fishing equipment, tiled floors, upcycled furnishings. They are the perfect example of a building completely fused with the surrounding environment. You can reach the area following an itinerary between land and sea that passes the “Seggiola del Papa” (The Pope’s Chair), a rock shaped like a throne.

At a first glance, this view, enclosed in a marl formation lying just below the Ripe di Gallina, looks like a contemporary art installation, to which nature has contributed with plants up there at the top, forming a sort of hat, while the sea offers movement and action.

The rules of the Conero Park require the caves to be respected and preserved, without compromising the “close relationship the caves have with the sea, an extraordinary example of integration between man and nature.” A piece of the past that resists. An ancient way of moving towards the future. 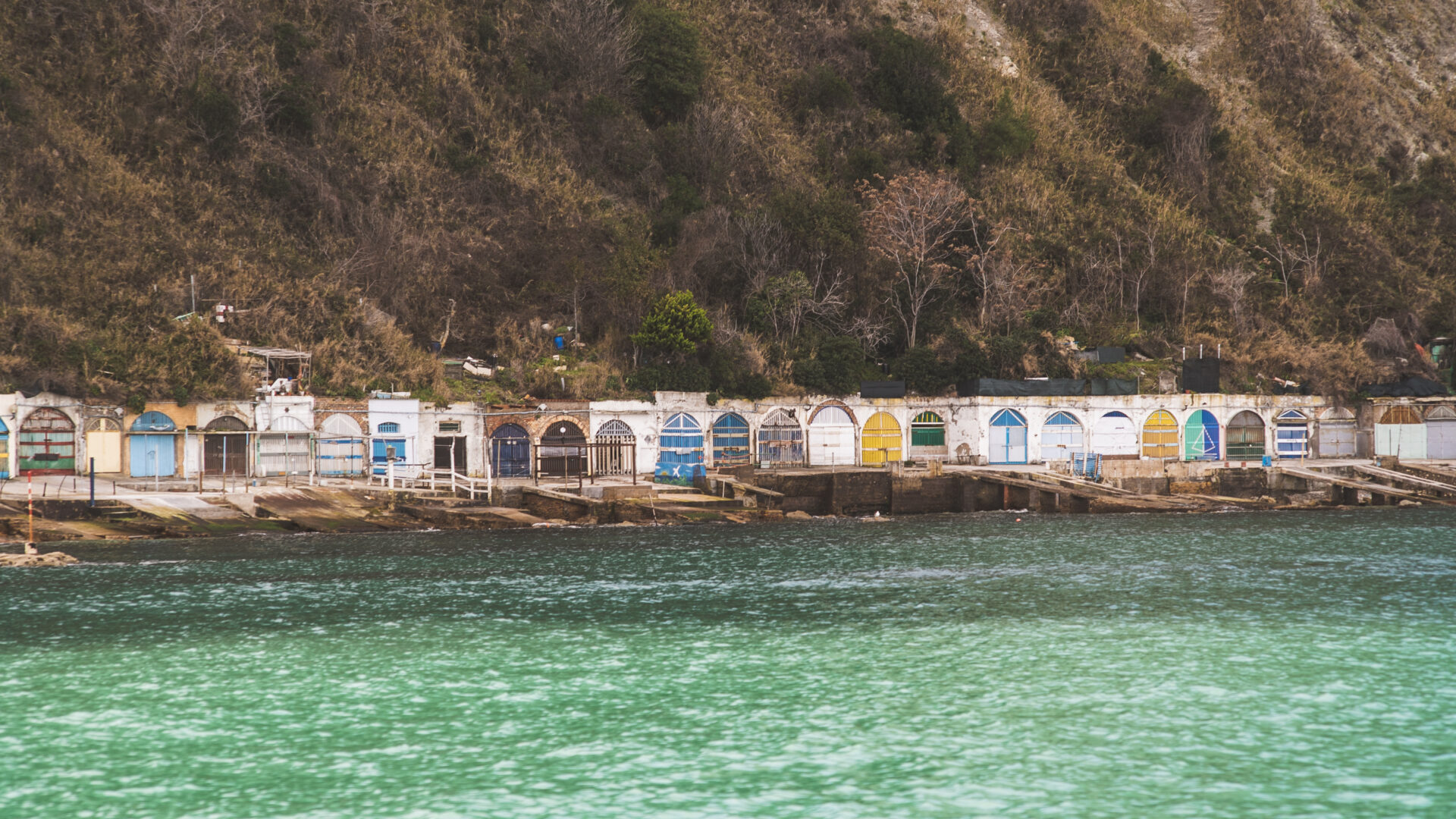 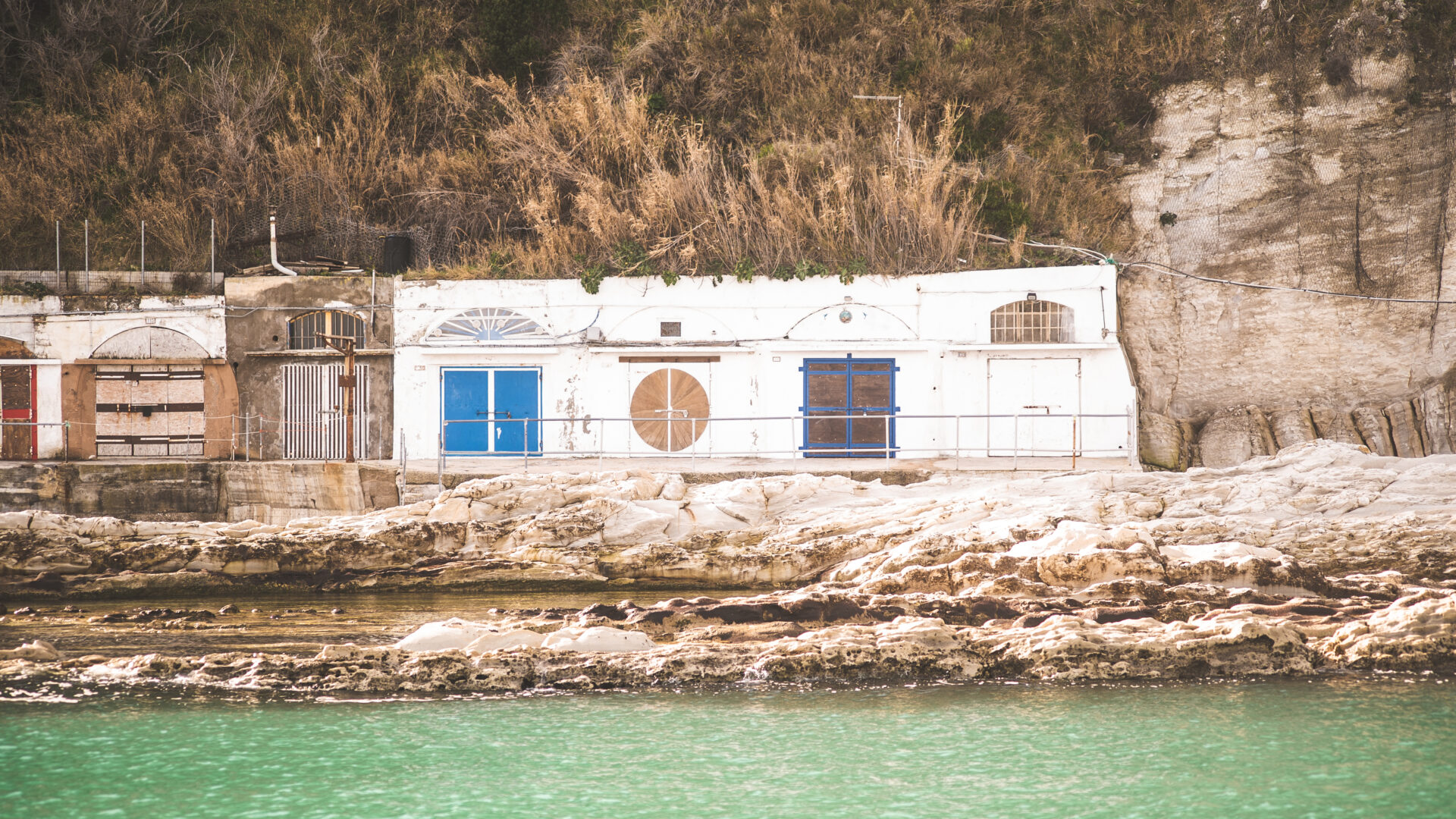 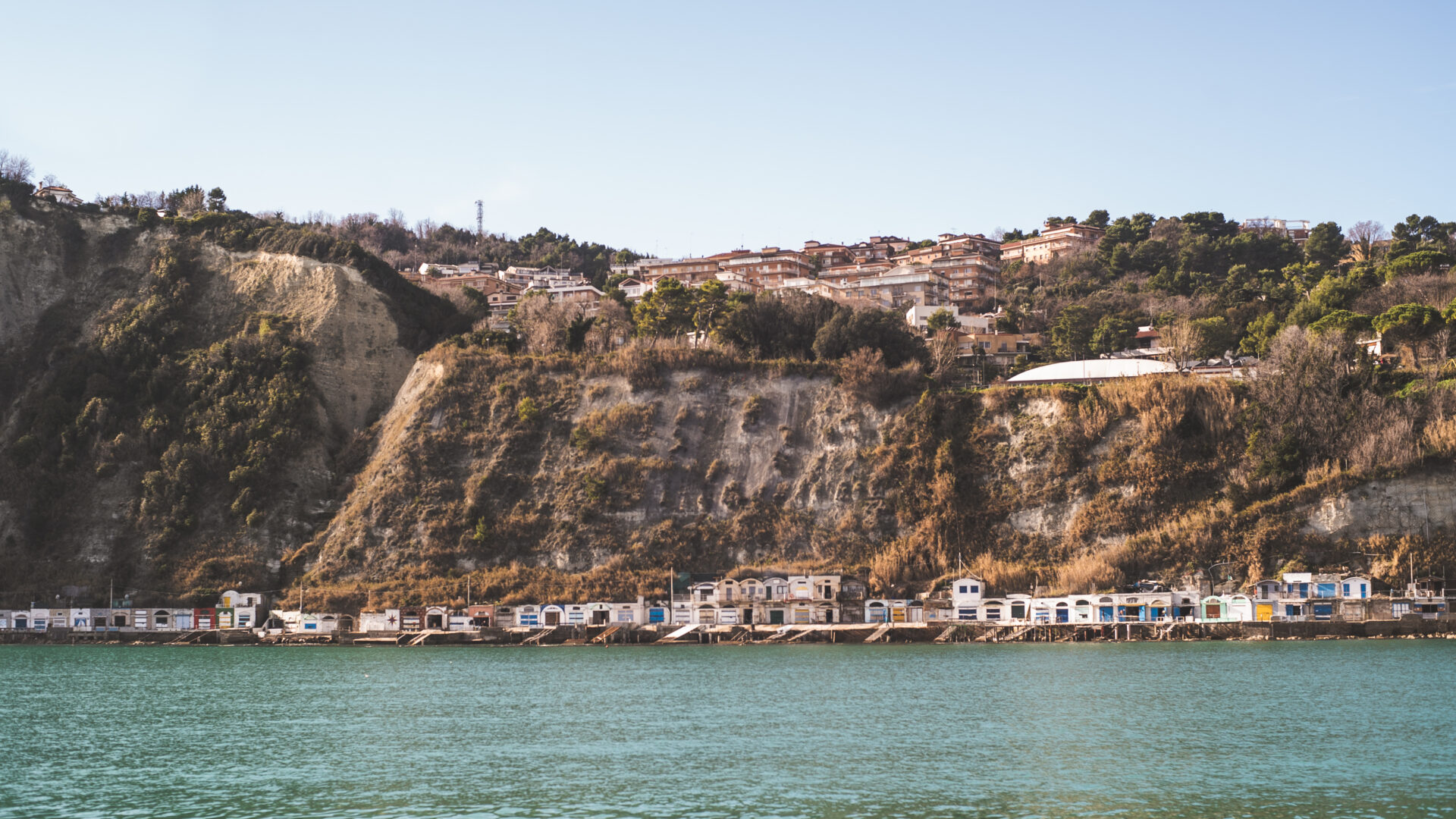 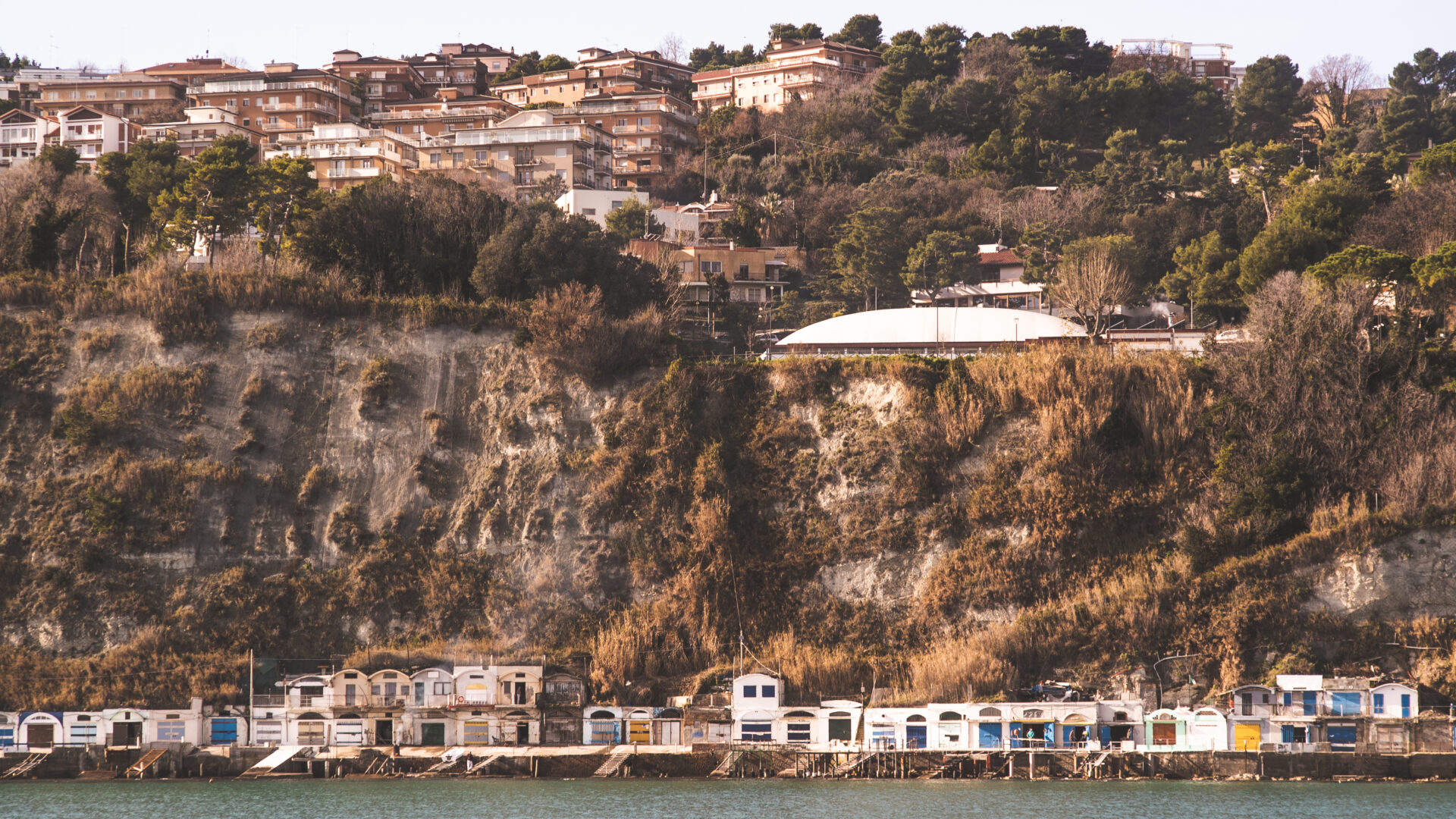 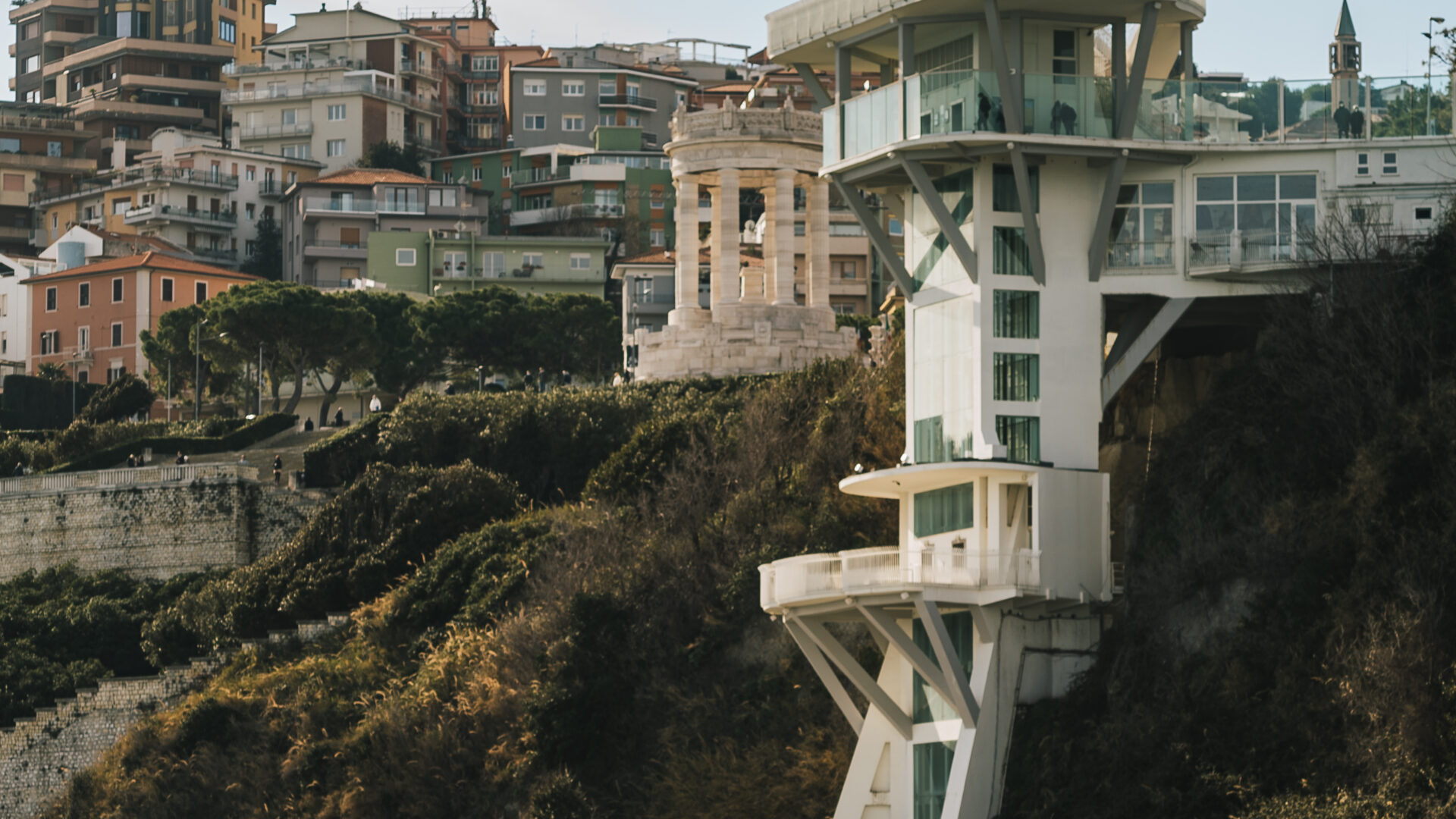