The approach is spectacular. When the ships and the ferries crossing the Adriatic Sea enter the port of Ancona, a monumental view opens before them, between Porta Pia – built towards the end of the 18th century by Pope Pius VI – and the Cathedral dedicated to St. Cyriacus that stands on Colle Guasco. Every day through this passageway the bond is renewed between nations and peoples, languages, cultures, and goods. Right in the middle, facing the city’s port front promenade, the commercial docks of the Nuova Darsena unfold, the heart of logistics and of the commercial port, with its containers and cranes, and the bustling activity of cargo ships and bulk carriers. It’s a dynamic space that has led to the transformation of the industrial port into a hub of contemporary logistics, where tradition and technology connect the territory to the broader globalized networks. The exchange of goods and values has its historical and privileged roots in the city’s connection with the Greek ports of Igoumenitsa and Patras, Durrës in Albania, and Split and Zadar in Croatia. From sea to land to sea, the role and importance of the Port of Ancona as a Gateway to the Orient is constantly renewed, a privileged hub connecting central and northern Europe to the south-eastern Mediterranean ports. Thus, along historical routes and those set by a new economy, ports, cities, territories, stories, and geographies are connected. And Ancona is always at the heart of it all, a homeland to mariners, saints, merchants, and travellers alike.

A port of places, people, and work; a port of monuments and rituals, faces, stories, and tradition; a port of identities, languages, perspectives, and local memories. Commissioned by the Central Adriatic Port Authority, Gian Luca Favetto (Turin, 1957), Italian poet, journalist, writer, and playwright, offers us an author’s view of the Doric port. He writes for the newspaper Repubblica and is a longstanding voice of Radio Rai. He is the creator of the project Interferenze fra le città e gli uomini. Among his most celebrated works: Se dico radici dico storie, the poem collection Mappamondi e corsari, the audiobook I nomi fanno il mondo, the novel La vita non fa rumore, and the short story Un’estrema solitudine.

Seen from the water, Ancona is a hill, or rather a series of hills chasing one another, entering the city at one end and at the other slipping elegantly into the sea, a ceaseless lapping of waves, under constantly changing skies, a mirror as it nears the harbour. Ancona is a city on the water’s edge, endowed with the qualities only port cities have. These qualities are their destiny, and you can’t go against your destiny if you want to preserve your identity.

A vision of red roofs and white façades, a living palette. Slow-moving, deliberate grey and blue cranes, like overgrown kids standing in a paired-up line. A breakwater, then another, and another still. The ensemble gives shape to a powerful, all-encompassing embrace that begins at the Marina Dorica and ends at the North Wharf, at the Mouth. Beyond lie the apartment buildings, the roads, the railway tracks and the Station, the Via Flaminia. And further: the Posatora, Piano San Lazzaro, Vallemiano, Borgo Rodi, Palombina, the historic city centre, the Passetto, and Pietralacroce. You know the neighbourhoods even if you can’t see them. You can make out the sounds, the noises, the hustle and bustle of the city. You feel them pushing up against the front, against the waterfront, with its bend revealing the true face of the city.

A long stroll with your eyes, south south-west moving to north north-east. A collage of visions and images. The Marina Dorica a forest of white trunks standing in the water, waiting to unfold their boughs when they pull their roots back on board and leave this spot, protected from the north and east winds, unfurling their sails and heading out into the waves. The Darsena, with the impressive shipyards where yachts and pleasure boats are built, and the warehouses like treasure chests from which jewels will emerge. The sediment basin collects the mud and sand from the ports under Ancona’s jurisdiction. The industrial area, where the containers are stacked, with the Marche Wharf that people here call Wharf 26. The Lazzaretto, the old leper colony, with the mandracchio where boats are moored and the fish market is. Behind it, a muddle of houses, bell towers, domes, windows like eyes, balconies for ears, and towers, rooves, and to the left, the solid elegance of St. Cyriacus, with the bell tower as its vanguard and the vast shadow of the Cardeto bringing up its rear. Further on, the vision closes with the majestic red and white Fincantieri gantry crane, resembling both a picture frame and a doorway.

Finally, the Mouth, with its wharfs, the green lantern and the red, the Roman harbour, the old port, the Rizzo Wharf, the Santa Maria Wharf, the cruise ship terminal. And the great ships, the ferries that are huge when seen from the land, but at sea look like swans, ducklings even. Their names are like verses: Jadrolinija, Adria, Anek, Snav, Grimaldi, verses like sounds, directions, routes. Every route is a step to be mounted, assaulted, savoured, smelt on the plain of the sea broken by waves. Together their colours form a rainbow of blue, yellow, red, orange, green, white – colours and motors grinding away. The great ships, the ferries, are the port’s sunset as well as its sunrise. 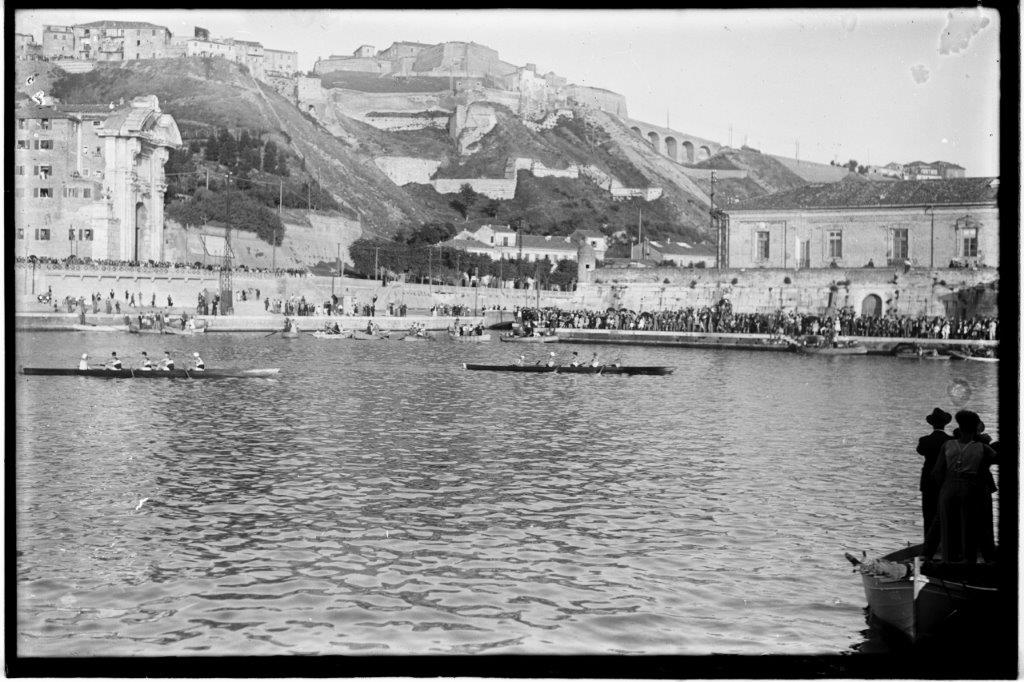 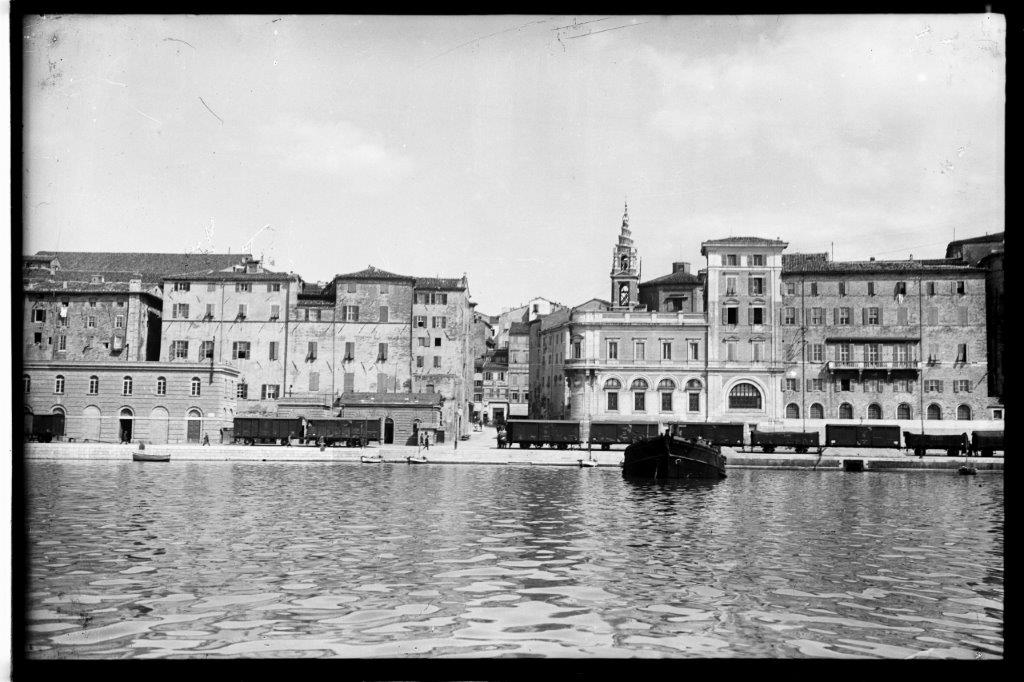 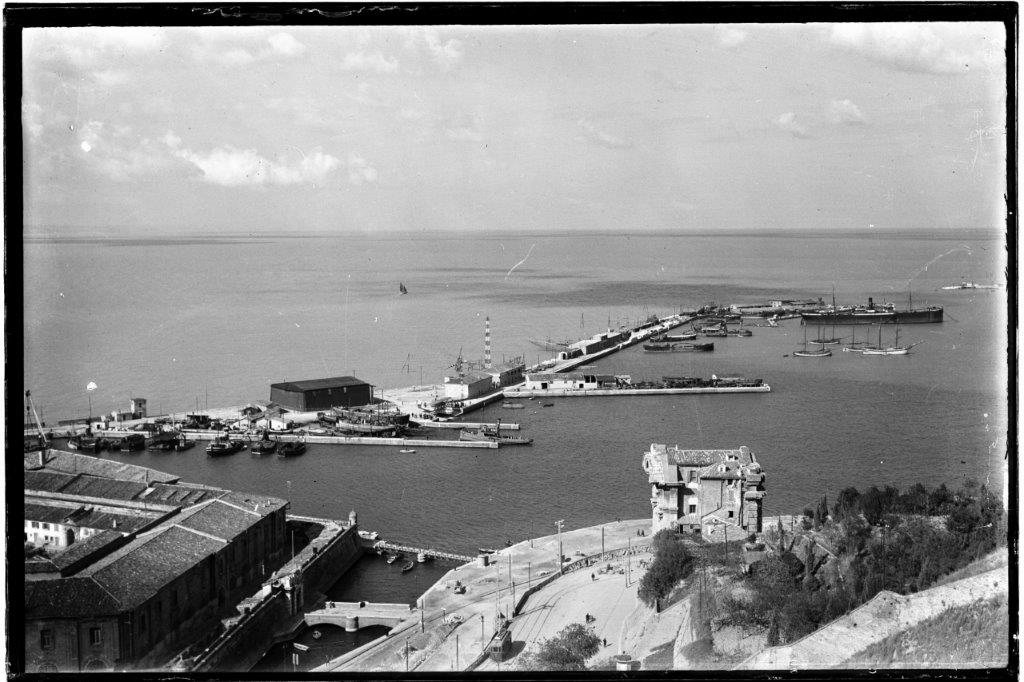 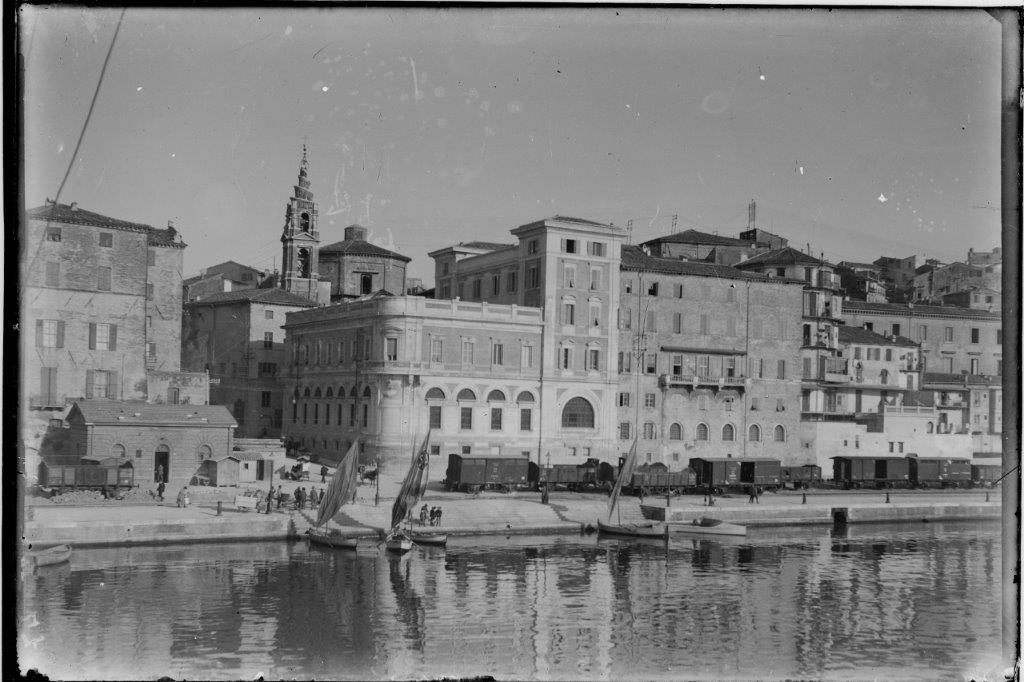